The Creepy Case Files of Margo Maloo: The Monster Mall

The Monster Mall is a worthy second installment to The Creepy Case Files of Margo Maloo series. Author and illustrator Drew Weing expands the world of Echo City with adventures via the subway, a moped, and checking out new neighborhoods. And while the variety of “monsters” isn’t as wide as in the first book, The Monster Mall delves deeper into Margo Maloo’s life and home, and we see further developments in monster/human relationships. 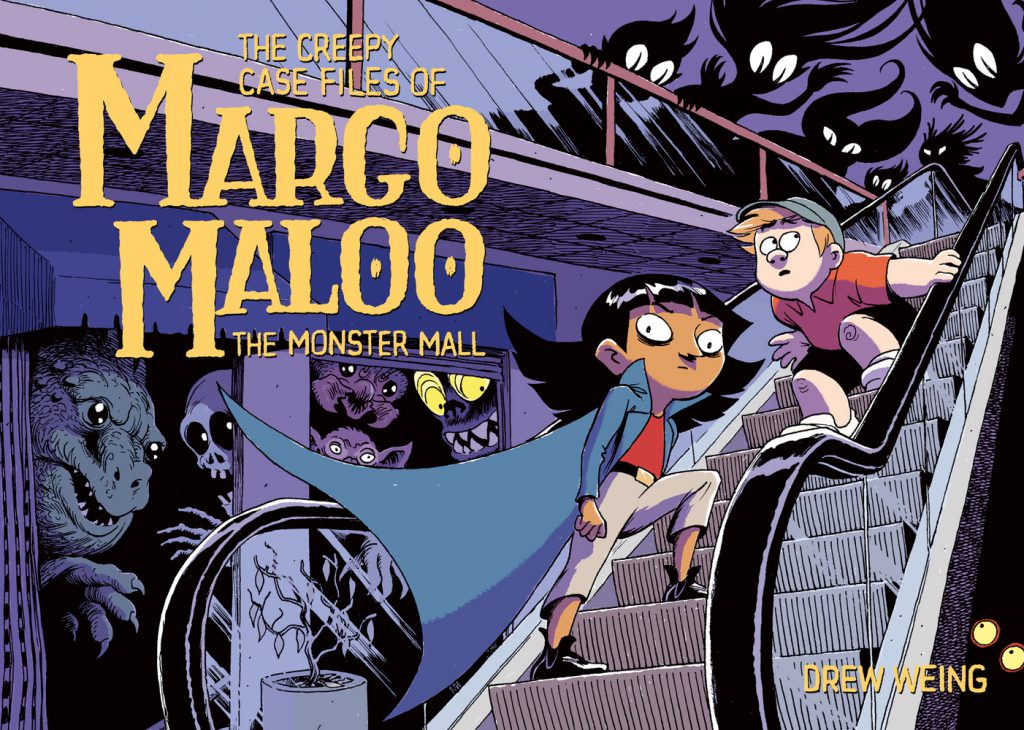 This second book continues the theme of bridging differences and changing residential landscapes that can cause one group to unintentionally but effectively harm another. In our review of the first Margo Maloo book, we liked “the casual but direct manner issues like gentrification, stereotypes, and challenging both fear and bias were addressed.” Weing continues to show effects of these issues in The Monster Mall. In one instance, Margo and her assistant teammate Charles Thompson help siblings solve what’s behind the mysterious pranks in their new home: A young imp named Fyo. However, they find that the former home, where Fyo’s family was still living, has been torn down in the name of progress. Where the imp family has gone is left unsolved at the end of the book, hinting at a future storyline.

In the incident for which the book it named, Margo and Charles investigate an abandoned mall after receiving a distress call from vampires about human intruders. The nervousness about the unknown from both sides of the conflict ends up becoming grudging admiration, as with many Margo Maloo mysteries. A welcome surprise: These teen vampires are vegans. In an attempt to correct the vicious mistakes of their parents, they abstain from blood, instead drinking coconut water. The book’s characters are consistently shown understanding and given compromises to help monsters and humans live in close proximity with relative peace. But for how long? Throughout the story, Weing drops hints that unwelcome change is coming for the monsters.

Weing’s illustrations adjust from whimsical to comic to spooky to loving. They are colorful even when they are overwhelmingly dark, and the illustrations manage to convey a full spectrum of emotions in various characters. As in the first book, the juxtaposition of Charles’ round profile and Margo’s sharp profile continues to work to endear them to readers as a team.

Alert readers will see references to The Shining, Slenderman, Pokemon battles, and (possibly) a light reference to Poltergeist. Margo’s search for information via her many sources introduces us to new monsters, including a forest floor being that even Margo doesn’t recognize, a group of vampires with musical interests, and the mischievous imp Fyo. A favorite from the first book, Marcus the troll, returns and his story is intertwined with Kevin, Charles’ friend who has been monster-skeptical – but that seems to change in this second book.

In addition, we learn more about Margo’s home and background via her Uncle Vikram and a peek into her office and files, which seem to have been left to her by her parents. Margo lovingly cares for her uncle, or Mamaji, and we find out her mother’s name: Shivani. It’s apparent that Uncle Vikram is a bit senile, which gives Margo cover for her independent adventures even as it demands that she care for her uncle much as a parent would.

Charles’ family life is given some attention as well, and one particularly relevant detail is that his mother now works for the Echo City Historic Preservation Foundation, which may develop into a boon or a complication for Charles and Margo in the third book. He also receives a long desired phone, which opens up a whole new world of independence for Charles in ways his mother’s talk about “phone safety” won’t apply.

The original Creepy Case Files of Margo Maloo set a high bar for story and illustration, and Drew Weing delivers with exuberance on both in The Monster Mall. Highly recommended for ages 8 and up.