Mighty Jack and the Goblin King

Mighty Jack and the Goblin King from Ben Hatke is a testament to adventurous storytelling and rich imagery. Opening with the same rush of action as the first book in the series, this second part of the adventure separates the friends and allows each character to find strength and courage on their own. The story picks up immediately after Maddie, Jack’s younger sister, disappears into a portal, and the pace never lets up. The dangers are more developed, the injuries more severe, and there is one mention of “The A Word” (Ass) in the text, but Mighty Jack and the Goblin King will thrill children ages 7-14 through multiple readings. 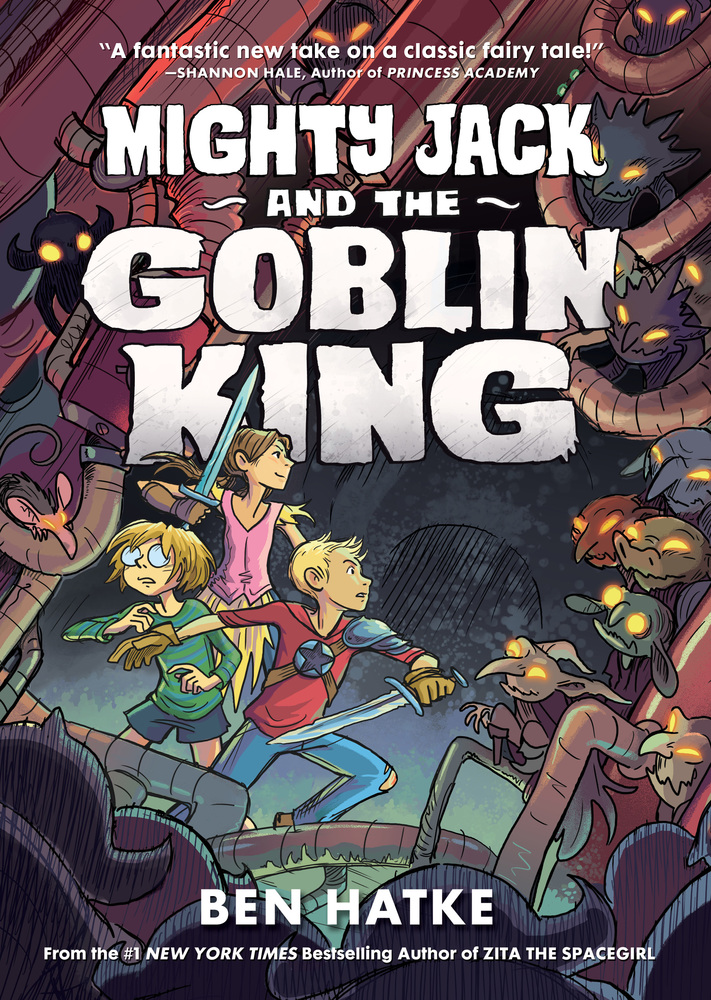 This second installment of the Mighty Jack series has focused the action to highlight Lilly even more. Her character expands and evolves dramatically during the story. When her ability to assist in Maddie’s rescue is diminished due to injuries, Lilly insists that Jack leave her behind. Soon after, she refuses to tuck herself into the fairy tale role of the maiden, and later she rejects Jack’s attempts to save her out of loyalty to new friends. Basically, Lilly experiences the search for identity and values that usually takes an entire journey through adolescence and beyond. Astute fans will go back to examine the title after reading.

The graphic novel makes references to classics of all kinds. Some readers will notice that the damsel in distress trope is turned on its head, others will be reminded of bogey men who unravel into creepy pests, and just about everyone will enjoy the appearance of a Magic 8 Ball. Bonus: Fans of Hatke’s other works will be particularly ecstatic to reach the end of the story.

As in the first Mighty Jack installment, each character gets hero moments. The continued growth of each character is highlighted by these heroic moments. Jack, who has always been a wonderful big brother, further develops his protective selflessness with strength and a touch of headstrong arrogance, which he works to overcome throughout. Maddie, who is helplessly carried away and caged throughout much of the story, gets her heroic moments as well.

The evocative and occasionally eerie illustrations convey movement and emotion beautifully. Lilly’s determination comes through in her stance and face, and Jack’s concern and stubborn courage are clear. The world Hatke creates is filled with otherworldly and familiar imagery that is at once gorgeous and overwhelming. Jack and Lilly meet various inhabitants in their adventures, and the consistent thread is that kindnesses are returned; it’s a true Pay it Forward parable.

Human children are fodder in this story, hearkening back to the basic fears of fairy tales. Maddie was kidnapped in order to feed a machine that powers the Giants’ world. The Goblin King wonders if he should eat or marry Lilly (she decides on a third choice). And all the children get bounced around, cracked against rocks, and battered in fights throughout the story. Even so, the gore is at a minimum; bloody scenes and displayed bruises are the worst of it.

While the character of the Goblin King is at once comical and frightening, the Giants come off as brutal and the rats are plentiful and menacing. However, the variety of creative characters in the Mighty Jack world balance the horror with loyalty, kindness, and humor. Mighty Jack and the Goblin King will make a fantastic addition to your graphic novel collection.