GoldieBlox and the Spinning Machine

There is a lot of buzz for GoldieBlox these days, mostly due to a great marketing campaign.  Their first commercial made a big splash, but their latest commercial is my favorite. Winner of the 2014 Toy of the Year, GoldieBlox is billed as an engineering toy for girls.  Here is a very interesting video of the founder of GoldieBlox talking about her inspiration for developing the toy. 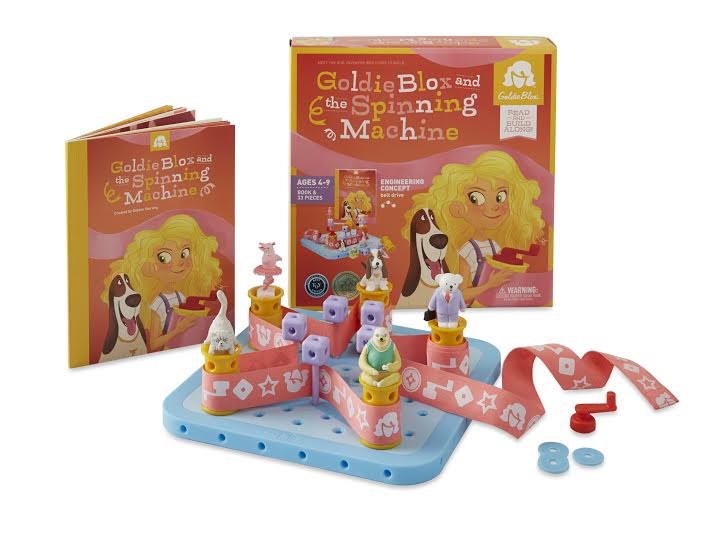 My daughter received GoldieBlox and the Spinning Machine and GoldieBlox and the Parade Float for her fifth birthday and she loves them both. Each comes with a build-along storybook to set up the first machine and inspirational charts in the back to encourage building more machines with the same materials. We were able to get through the first storybook and build the spinning machine, but my daughter was so excited to “engineer” on her own that we haven’t yet made it through building the parade float. What my daughter loves about the set is that it comes with several animals that are part of the story. She can “engineer” while playing with these animals and adding to the story line set up in the book, which really is her favorite way to play.

I highly recommend this set for any children in your life. It’s a great introduction to engineering concepts and its story line set up encourages continued building once the initial machine is built. It’s a great way to get children interested in STEM (science, technology, engineering, and math). Also, it features a strong female character, which is highly lacking from STEM toys. I think this is a great toy for girls and boys as well.

There was a surprise in the book for GoldieBlox and the Spinning Machine that made me like it even more. GoldieBlox says she wants to build a spinning machine for her dog Nacho who she rescued from the pound. It’s almost a throwaway line and is completely unnecessary for progressing the story. That one line has really resonated with my daughter, who keeps referring to the dog as “that rescued dog Nacho.” Things like having a girl lead a story book about engineering and having a rescued dog as a central character may seem like little things, but they have a big impact on children who are observing everything.