You Read to Me, I’ll Read to You: Very Short Fables to Read Together 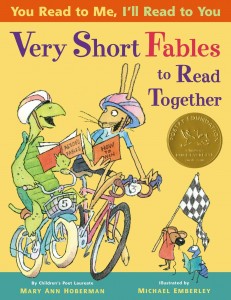 This is the newest book in a series of fun and playful poems that children can read in pairs. The poems are arranged in three columns. Person A reads the left column, Person B reads the right, and the middle column is read together. Thus the poems read like a friendly conversation between two people. The rhymes are whimsical, silly, and pleasing to young ears. As a teacher, I’ve used this to help children who need to develop the skill of reading out loud; yes, friends, I trick my kids into becoming good readers! And it works.

Very Short Fables centers on some of the better known tales — such as The Hare and the Tortoise, The Fox and the Grapes, and The Country Mouse and the City Mouse — as well as some fables that were new to me. At the close of each two-page story, the readers say the moral in tandem. (Example: “Just keep up an even pace. Slow and steady wins the race.”)

While some of the fables are sweet and charming, there are a few that could be sore spots for vegetarian or vegan families. The Goose that Laid the Golden Eggs, for example, shows illustrations of a farmer pulling the eggs out of an understandably upset goose. Later he puts a blade to the frightened goose’s neck and then, after killing her, laments his lost fortune as he lies slumped next her somewhat eviscerated body. (To be fair, it’s a stuffed goose with buttons whose opened insides are red ribbons, but the images are still unsettling.)

In another tale, The Ant and the Dove, a hunter gets tricked and bitten, so the animals do have their moments of glory in the book.

In short, this is a fun collection and series, but you might want to flip through it once to see if some of the less animal-friendly tales mesh with you before presenting it to your youngster.