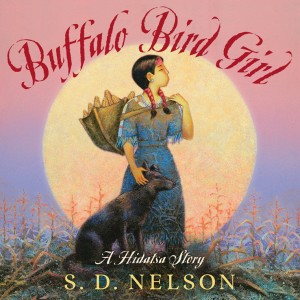 In 1906, an elderly Native American named Buffalo Bird Woman related the story of her childhood during the mid-19th Century to a visiting anthropologist. More than 100 years later, author and illustrator S.D. Nelson has transformed her efforts to immortalize the traditions of her people into a picture book for children ages 6 to 10.

Buffalo Bird Girl: A Hidatsa Story (Amazon affiliate link) presents the story of this woman’s childhood. A member of the Hidatsa people, one of the many tribes that were a part of the Great Plains Indians, she spent most of her early years living in a permanent settlement known as Like-a-Fishook Village alongside the Missouri River.

The Hidatsa people grew crops such as corn, beans, squash, and sunflowers. Nelson’s sweeping, colorful acrylic illustrations of village life combined with black-colored pencil drawings and photos of Native Americans in the early 20th Century re-create the village of Buffalo Bird Girl’s childhood, along with her first-person narrative of her tribe’s ways. She recalls, “From spring to harvest, my younger sister and I would sit atop a platform, keeping careful watch over our cornfields,” protecting the fields from crows, gophers, horses, and other creatures. She and her sisters would sing “songs to the corn . . . in the same way a mother sings to her young child.”

Like other native peoples, Buffalo Bird Girl’s tribe hunted animals to use for food, tools, and furs.  She describes how her grandmother used a buffalo shoulder blade to dig a pit in the earth to store food. But there is no graphic description of how they prepared food and other products.

In notes at the end of the book, Nelson includes facts about Buffalo Bird Girl’s life and the history of the Great Plains Indians, including the Hidatsa. The story of Buffalo Bird Girls opens a window to a long-lost past. Her poignant story will resonate with 21st Century readers, especially those interested in books about the traditions and culture of 19th Century Native Americans or those who enjoy historical accounts and fiction about this period in American history.