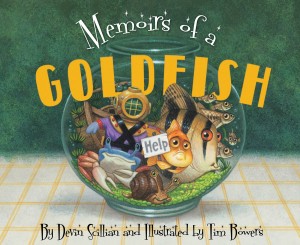 I received Memoirs of a Goldfish and Memoirs of a Hamster from Sleeping Bear Press for review a few weeks ago and they’ve both been read numerous times in our home. My almost 3-year-old son and almost 5-year-old daughter love the expressive and cheerful illustrations by Tim Bowers in these large format books and the first-person diary format (by Devin Scillian) grabs and keeps their attention.

Memoirs of a Goldfish reports on the days in the life of a goldfish that goes from having a simple bowl all to himself to having new décor (a bubbling diver, for example) and others with whom to share his tank (a snail and guppies to name a few). He’s not happy with these developments and the bowl continues to crowd in around him until he wishes everyone away. On day thirteen, our protagonist is transferred to a smaller bowl all by himself but wonders what happened to his friends. He realizes that he cared about them and misses them all. Shortly thereafter, he reunites with his friends in more suitable tank and is content. 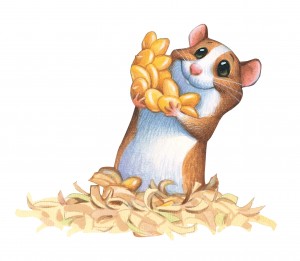 Memoirs of a Hamster uses the familiar format of Goldfish but the twist is that the hamster brings about the conflict in the story with his actions. The hamster loves his wheel and his yogurt drops, he even loves Pearl the cat who gives him the inside scoop (or so he thinks…) about the world of the house, stairs, and sun room. Hearing about the yogurt drops in the sun room motivates the hamster’s escape and swift discovery that Pearl had other motives for encouraging him to make a break for it. All ends well for the hamster even though he does believe he’s going to die at one point (neither of my kids were troubled by this but the hamster does write a will so I wanted to mention it).

I think with both books, animal lovers will know at the outset whether they would be a good fit for the children in their lives. What I mean to say is that if you have no qualms with goldfish or hamsters as pets and the typical way they are kept then these books should be fine. I did wonder why the goldfish was in the crowded bowl for twelve days before reaching the new tank but the first person account approach doesn’t condone any given living condition, it just reports it and is a good conversation starter. If you had to pick one to start with, I’d say we preferred Memoirs of a Hamster but both are enjoyable, had my kids laughing, and may get your little one thinking about writing a memoir of their own.