The Adventures of Penny, The Rhode Island Red 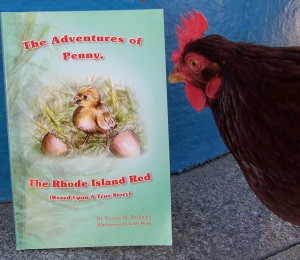 They are the most striking animals. Their scaly legs and feet remind of us their distant relatives, the long extinct dinosaurs. Their bright red combs and wattles mesmerize, as do their beaks, wings and curious personalities. Chickens are one of the animals we first encounter in storybooks, folktales and film (think: Little Red Hen, Chicken Little) and yet they remain one of the most misunderstood and abused of all animals.

In recognition of International Respect for Chickens Day and the launch of the National Museum of Animals & Society’s exhibition “Uncooped: Deconstructing the Domesticated Chicken,” I am pleased to review The Adventures of Penny, The Rhode Island Red (Amazon affiliate link), a title we received for the museum’s collection and that I couldn’t help but read immediately. Out of all the farmed animal-themed literature out there for children written by animal advocates, chickens seem to have a growing representation (Minny’s Dream, The Chicken Gave It to Me).

Author Yvonne Backman worked as an animal caregiver at Children’s Fairyland in Oakland, California which took in two rescued chickens, the sources of inspiration for this chapter book. The Adventures of Penny chronicles the harrowing journey from birth to refuge of a factory farmed hen and her friend Henry who flee to freedom after an accident involving their transport truck. Just a few weeks after hatching from an egg, Penny never meets her mother, is de-beaked and has to learn how to compensate as a result, and watches one chicken friend, Seven, being taken away to a “better place.” This better place, she eventually learns, is a commercial farm and slaughterhouse. After her own trying travel to the next farm (rain-drenched, cooped and caged) which results in an accident, she flees to the nearby forest where she makes friends with a number of wildlife – skunks, rabbits, a crow, a fox – who teach her how to be a chicken and forage, discover water sources, and dustbathe.

It is during a babysitting gig for a trio of rabbits, that Penny is a hit by a car on a freeway and is taken to a nearby children’s park, where she adopted, loved and doted upon by animal caregivers and children alike. Here she is reunited with Henry, her male chicken companion, who in his own happenstance-sequence-of-events makes it to the same sanctuary.

There are a few unlikely points in the story. First of all, Rhode Island Reds generally aren’t a breed found on factory farms. Secondly, the author makes a point to say that the chickens’ beaks grow back – “…beautiful, strong, shiny beaks, with a nice point one the end.” Although de-beaked birds may have some growth, normally they do not come in as they would have and most birds still have difficulty eating and pecking normally. Such slight oversights hinder the work of humane educators who believe in providing the most factual information possible so that youth can make their own educated decisions.

But with my rose-tinted lenses, I give this work thumbs up for braving an always difficult topic and making it an engaging, fast-paced read. Graphically, the cover may be a little dated, but the illustrations inside are a charming salute to simple times and messages: animals think, feel pain, and share joy, just like we do.