Tina and the Penguin 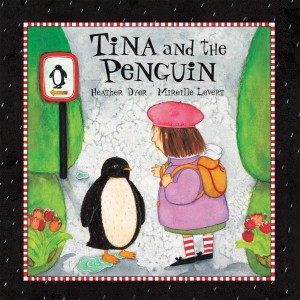 On a class trip to the zoo, a penguin escapes from his enclosure and starts to follow Tina around. Realizing that the zoo is no place for a penguin, Tina dresses the penguin in a disguise with a pink beret and sneaks him onto the school bus and back to her house. Then the fun begins as Tina tries to keep her penguin friend a secret from her parents. It’s difficult when the penguin keeps rushing to the kitchen to stand in the refrigerator and eat sardines. Tina tries to have a bath with her penguin, but he likes it full of ice water and her lips turn blue. At night she sleeps with the window wide open in the middle of the winter so that the penguin is comfortable, but she lays shivering under layers of blankets. One night, out of frustration, she says to the penguin, “I don’t think this is working out.”

On her way to school the next morning, Tina leaves a book about Antarctica for the penguin to look through, thinking he might enjoy seeing pictures of other penguins. That night when she gets home, her penguin friend is gone. She searches for him for weeks, but he’s no where to be found. That is, until one day while watching a show about Antarctica and a colony of penguins – Tina sees a penguin in a pink beret and knows that her friend has made it home.

I love this book (Amazon affiliate link) because it’s not preachy. The penguin clearly belongs in Antarctica with the other penguins, and not in a zoo, and finds his way there eventually thanks to Tina. But that’s not stated explicitly in the story. It’s for the reader to infer by the penguin’s actions. I also like that Tina is not sad that her penguin friend is gone – she’s happy that he has found his way home. The pictures in the book are colorful and fun and the story of the penguin in Tina’s home is quite amusing. My daughter enjoys this book, and I do as well.

We are going to the zoo for the first time in a few weeks. My three year old daugther has been invited to a birthday party. She was so excited when we told her about the birthday party, but then we told her it was at the zoo, and her face fell. A few days later she had a conversation with my wife where she basically told my wife that we should just go to the zoo and not think to much and just enjoy looking at the animals. I’m guessing she will love the zoo, because who doesn’t love seeing all of those animals? I’m happy that we will have this book and When Lulu Went to the Zoo so that we can continue the conversation about zoos further once she’s seen a zoo herself. I highly recommend this book.