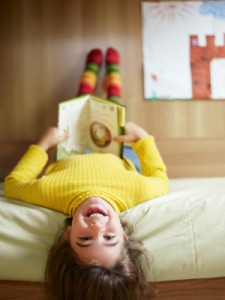 Fans of chickens and commentator/ author Daniel Pinkwater may be familiar with The Hoboken Chicken Emergency (Amazon affiliate link), first published in 1977. Unsurprisingly, some of the material is dated but the overarching tale of genuine affection portrayed between a boy and a giant chicken rings true with young animal lovers. Aspects that won’t ring quite as true for the same young animal lovers are the way animals and eating animals are characterized in this story.

When young Arthur is sent out to purchase his family’s turkey for Thanksgiving, a series of events unfolds which leads to Arthur bringing home a live, 266-pound chicken he’s purchased from Professor Mazzocchi, a mad professor type (a character who very much veers into territories some might describe as hoarding and animal experimentation). The chicken, understandably, is unwilling to be someone’s dinner. With Arthur already bonded to the bird, it is quickly decided that the family cannot eat her. They have meatloaf instead for Thanksgiving dinner. Arthur quickly learns that the giant chicken, whom he names Henrietta, is a smart and thoughtful bird who is easy to get along with. Pinkwater depicts Henrietta as a lovable animal. Arthur trains her to play on playground equipment but when a dog chases her, she takes off and chaos ensues. The fire department is called, and Arthur’s father decrees that Arthur must return the chicken to Professor Mazzocchi. The professor takes her back and a sad Arthur returns home.

However, the affection of the giant chicken for her friend is underestimated. She escapes, attempting to return to Arthur but many problems arise as the citizens of Hoboken feel scared and threatened by a mysterious large white presence. In the meantime, Professor Mazzocchi leaves town. Spotted everywhere, many capture attempts are made without any regard for Henrietta’s welfare as Hoboken goes insane with fear and its government and citizenry react accordingly.

After the desperate city is swindled by a con man chicken wrangler, Henrietta is still on the loose, and Arthur continues to be scared and worried about her given the angry and frightened reactionary mob mentality. A mysterious figure with surprising similarities to Professor Mazzocchi comes into town claiming he can help. His advice? For everyone to shift their patterns of treating the giant chicken from an adversary to a frightened being. He has Hoboken create a LOVE HENRIETTA campaign, hires the Goodyear blimp to tow a “Chickens Need Your Love” banner, paints large white chickens on all of the police cars and sends out reeducation brochures in English, Spanish, Italian, Polish and Hindi. Henrietta reacts positively to the kinder, gentler treatment and soon is back at Arthur’s feet. Everyone realizes they had nothing to fear, and Arthur and Henrietta are issued the city’s first chicken license.

While the story is humorously crafted, the reflections in this story about how we treat and eat animals in our society may make this book unappealing for veg families. Unfortunately, eating veal is mentioned as is consumption of other meat (it is set in the 1970s in Hoboken). The dog that originally chased Henrietta was one of many who were allowed to roam loose through the city. And, rather disconcertingly, Professor Mazzocchi’s work with animals involves some unpleasant ideas, such as attempting to grow square fish so that sardines and anchovies can be stackable.

I think this story is worth a read for older elementary children who are not extremely sensitive. This book is a look at how we are evolving as a society in our treatment of animals as well as our choices of food. There are funny aspects to the book that will hook children and the happy ending will please. If you have read this, or end up reading this, please leave us a comment and let us know what your thoughts were!