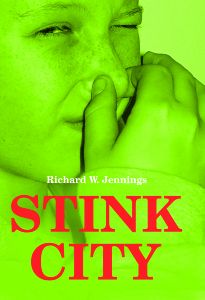 Written from the perspective of a young teen, Leigh Ann, Stink City (Amazon affiliate link) is a story that zigzags its way through a myriad of issues — focusing mainly on Leigh Ann’s neighbor, Cade Carlsen, and his attempts to address his lot in life.

Cade is the scion of a family which has invented one of the world’s best (and mysterious, and stinky) catfish baits. This has made the family wealthy, though their popularity in the small town in which they live is impacted by the fact that they manufacture a terribly bad smelling product. As is common in small town novels, there are lots of characters in the form of an elderly grandfather, quasi-nefarious fish activist and a number of others. “Fish feel pain,” Cade declares and thus the story’s groundwork is laid: a boy who believes fish feel pain in the midst of an family, company and social structure that does not seem to care. Cade’s attempts at advocacy go somewhat awry when he becomes involved with a loose cannon fish advocate (the head of Foundation for Ichthyology Studies and Humane Treatment of Aquatic Life Everywhere, or FISHTALE) who is, from Leigh Ann’s point of view, not too proud to leverage a fish-friendly worldview in exchange for some sizable donations.

The writing is intelligent, humorous and enjoyable for the most part, though there are points where the plot is clumsy and overly busy. Since the perspective of the story is that of a teenager, the tale is convoluted. Kudos to author Richard W. Jennings for very accurately capturing many of the ups and downs teens experience!

The fish advocacy portion of the plot is not the only is not the only aspect of the story swirling around. It is, however, mostly played for laughs. Those who know about some of the perils that fish in our waterways face or do not believe that eating fish is ethical will not appreciate this marginalization. There are mentions of fishing and dead fish too numerous to count. Animal advocates may not be pleased with the status quo attitude that is continued in this story. In the end, Stink City is a fun read but disappointing from an animal lover’s/advocate’s perspective.