Riding in My Car 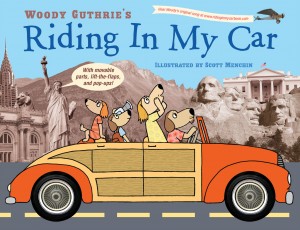 I received this book as a review copy. It is a picture book based on the Woody Guthrie song. The book takes the reader on a road trip through the United States, with images from New York City to Washington, D.C., to Mount Rushmore to the Golden Gate Bridge.

This book is more than a picture book. It’s one of the most involved lift-a-flap books I’ve seen. Every page has multiple moving parts which include car doors that open, horses that jump, cars that drive along a road, and people that dance. There are also flaps that lift to reveal facts about the United States, such as “Route 66 is a famous road that goes from Chicago to Los Angeles.”

While I enjoy the interactive nature of this book, I don’t think I’m the target audience because I don’t know the Woody Guthrie song. Maybe someone that knows the song would enjoy it more than me.

From an animal rights perspective, I don’t appreciate the fishing scene.  The family is depicted happily fishing from their car on a mountain lake coupled with the fact, “The largest freshwater fish ever caught in the United States was a 468-pound white sturgeon.” Unfortunately, I do not recommend this book for families that care about animal welfare.