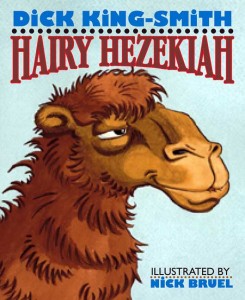 Poor Hezekiah! This Bactrian camel gent spends his days in a British zoo, very lonely indeed. The hairy fellow spends much of his time talking to himself, or to his keepers, who do not understand a word he utters. This makes him ill tempered and unhappy. Eventually Hezekiah has a go at unlatching the gate to his enclosure, and, what do you know? He frees himself. Thus the story of Dick King-Smith’s Hairy Hezekiah begins.

Hezekiah wanders around the zoo, searching for a friend. None of the other species are suitable candidates, so he leaves the confines of the zoo and begins roaming the British countryside seeking companionship. He meets up with a group of cows, who suggest that he head to a nearby safari park since there are lots of unusual animals to be found there. At this point, on page thirty-three to be specific, I became disillusioned with the story. After all of the tribulations he’d overcome to achieve freedom from the miserable zoo, Hezekiah was just going to amble willingly back into captivity? Sigh.

Hezekiah heeds the cows’ advice, heading to the safari park, run by an eccentric, wealthy, titled white man. The Earl of Basin has always wanted a camel to add to his collection and is elated when one shows up. A hirsute individual himself, he immediately takes a special shine to Hezekiah. The camel finds himself comfortable at Lord Basin’s safari park, where he quickly befriends many of the animals. Lord Basin decides Hezekiah needs a mate and arranges for a female camel to be shipped from a zoo in the United States. Without bothering to ask the transferring zoo what her name is, Lord Basin christens the female Hephzibah when she arrives. The two camels kiss upon introduction, clearly destined to live happily ever after.

Though Hezekiah himself is portrayed as having a happy ending, the overarching messages in this book are disturbing and disheartening to animal advocates. Since zoos and safari parks exploit animals and are very much profit driven enterprises, it is disappointing to see their glorification play such prominent roles in this book’s storyline. In fact, Lord Basin displays complete disregard for the importance of established family group dynamics when he trades a young gorilla for Hephzibah. He also casually trades a white tiger to the zoo from which Hezekiah escaped. The takeaway from Lord Basin’s behavior is that what is important is whatever Lord Basin desires. The message that the individual facilities’ desires trump any sense of concern for the animals’ well-being is very outdated but is presented without balance.

I recommend this book for older kids as an illustration of how things should not be — it works as a place to open a conversation with children about the role of captive exotics in our society. If you are interested in having a discussion about these issues, Hairy Hezekiah provides numerous instances of animal exploitation and woeful inadequacies of captive life for exotic animals in a fairly non-threatening manner.