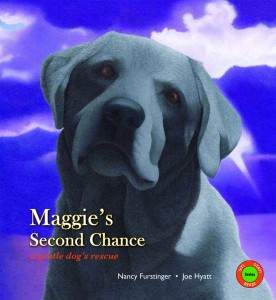 As soon as a review copy of Maggie’s Second Chance: A Gentle Dog’s Rescue arrived, I looked through it and knew that Gryphon Press had another wonderful title with the release of this fantastic book. However, the true test is that of the intended audience, and in this case, the book was well received by children– as in the “let’s read this again!” for many nights in a row kind of well received.

Black lab(-ish) Maggie is abandoned when her family moves. Pregnant and left without food or heat, she is discovered by a real estate agent and ends up in custody of animal control. Maggie gives birth while at the shelter and her puppies are adopted out in short order while Maggie remains behind, “just another big black dog blending into the shadows.” (Black dogs do often have a more difficult time being adopted out.)

Though featured in the local paper, Maggie continues to languish in the shelter. One day a boy catches sight of her photo in the paper while he is taking out his family’s recycling. When he finds out she is in danger of being euthanized, he and his classmates are galvanized into action. They craft a plan for an animal shelter and present it to their town council, which, implausibly, gives permission for a no-kill shelter to be built.

Despite a seemingly lengthy hold time at the municipal shelter, Maggie’s time is up. With no potential adopter in sight, she is prepared by an apologetic shelter worker as she is to be led to her death. However, in a dramatic last minute rescue, she is saved– tapped to go the new no-kill shelter founded by the students.

Adults will need to hold on to their heart as they read this particular book, which does not shy away from the very difficult subject matter of shelter issues. However, through the author’s sensitivity there is an impressive dignity that accrues throughout the telling of Maggie’s story. The appealing illustrations lend themselves well to the story and depict Maggie as a gentle, patient, loyal girl. This fictional story is based on elements of a couple of true ones that have been woven together, but of course, not all animals (especially big black dogs) are lucky enough to find homes.