The Case of the Vanishing Golden Frogs 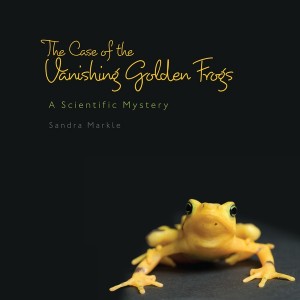 What do you do when you notice all hell’s broken loose? That’s the question frog researcher Edgardo Griffith faced when he observed the dramatically declining populations of Panama’s national amphibian symbol, the golden frog.  And it’s what award-winning author Sandra Markle sets off to document in this adventuresome book that has serious environmental themes and warnings.

Readers join several scientists as they journey through this vibrant detective-style text addressing a dark spot on Panama’s landscape: the disappearing and dying golden frog. And it’s a case study for what will surely be a worldwide phenomenon of wildlife in crisis. Youngsters will learn about the calamity as the scientists did and follow their line of inquiry: What could be killing the frogs? Could it be pollution? Climate change?

The assailants, it turns out, are Chytrid, exotic microscopic fungi that release chemicals that break down the frogs’ tissue, effectively killing them. Now the question becomes “How do we stop it?” Markle spends the rest of the book detailing the full-throttle efforts of the scientific and zoological communities through Project Golden Frog to save the cute, little, yellow frogs: from housing the uninfected individually in small carriers to bathing the infected ones with a mild, fungus-killing chemical to launching international breeding programs.

The book so eloquently sums up the current status of the golden frogs: “Colonies of golden frogs still exist in Panama, but all of these golden frogs live in aquariums. It’s like being on board a spaceship, waiting to reach a safe planet.”

A wonderful and colorful publication for science teachers and budding ecologists. Find a cute coloring book for younger kids, here.