Henrietta and the Golden Eggs 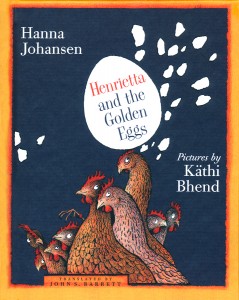 Any book that begins with the unlovely depiction of life on a factory farm, such as this one which opens, “once upon a time, there were three thousand three hundred and thirty-three chickens who lived in a great big chicken house…” has my rapt attention from the start.  In Henrietta and the Golden Eggs, the life of an egg-laying chicken on a factory farm is depicted as significantly unpleasant, including stinky air, feather loss and overcrowded conditions.  However, one young chicken has her sights set on a different kind of life.  Little Henrietta announces that she is going to learn to sing and lay golden eggs.  The other older, more downtrodden citizens of the chicken shed are not supportive of her dreams.

Henrietta scratches and pecks at the chicken house until a small hole becomes large enough for her to step out and explore the green world outside of her shed.  Eventually the hole is enlarged so that all three thousand, three hundred and thirty-three chickens can leave the shed, and they do just that, settling into peck about in a nearby wheat field and causing a great deal of consternation for the farm workers.

The hole is patched, but Henrietta manages to find her way out into fresh air again, and proceeds to have a series of further adventures, including attempts at swimming and flying (“you call that swimming?” ask the other hens.  Henrietta is undeterred, answering, “the water is too wet for my tummy.”).

Each time Henrietta escapes, the thousands of other hens do as well, which of course is a crazy-making situation for the farm manager and farm hands.  Eventually, the hens smarten up and scatter as attempts are made to catch them.  After several days, the workers admit defeat. When the manager is upset at this news, the farm workers propose building an outdoor yard where the hens will have access to clean air and scratching and pecking opportunities– which is just what they do.  Meanwhile, Henrietta’s first egg turns out to be a run-of-the-mill brown one, though she herself knew it would be all along.

In the end, Henrietta’s adventurous spirit leads to a significant improvement in the lives of the hens.  However, vegans and opponents of factory farms will be disappointed by the pat ending, in which access to the outdoors appears to solve all woes.  As we are aware, the truth is far more complex.  I would have loved to have read an ending in which the hens were truly released from their bonds.  Although I am disappointed on that score, I commend this book for refusing to flinch from some of the unpleasant welfare and economic realities of factory farming.  Henrietta herself is a spunky, likeable young bird.  The pen and ink line drawings by illustrator Kathi Bhend are divine and she brings the words to life in a very appealing way.  Check some of them out from this story here.  Inspired by Henrietta’s tale to reduce your consumption of eggs? Check out this resource for helpful tips on baking without them!