The Dog Who Had Kittens 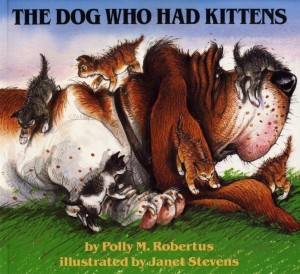 This story is as sad as a droopy basset hound’s face for as many reasons as he has wrinkles. Although the pencil-sketch style illustrations of the animals are adorable, the story illustrates so many acts of irresponsible pet ownership. And my daughter loved the story.

We selected the story thinking of our own basset hound/German shepherd mix and my daughter’s love of cats. The story starts pleasantly enough with Baxter the basset enjoying the spring air in the yard when his boy calls everyone over to the garage to watch Eloise the cat birthing kittens (graphic images not included). The boy’s parents also arrive to see what is going on, implying they had no idea that their cat (who also appears to be a collarless outdoor cat) was pregnant. The boy then takes Baxter to the yard while they move the cat and kittens into the house “So Baxter was chained to the tree and abandoned.” For hours. Baxter howls out of jealousy that Eloise and her kittens are getting a lot of attention (or was he really howling about being tied up to a tree?) and finally the cat comes out to warn him to stay away from her kittens. Eventually the boy feeds him and scratches his head but he ends up being moved out into the garage for several days while the kittens and Eloise stay in the laundry room. He finally is allowed back in the house but is banned from the laundry room until “one day, the family left the house, but didn’t quite shut the laundry-room door.” Thus begins Baxter’s stint as doggy daddy/nanny to seven crying kittens (since Eloise “only came around to feed and wash her babies”). The family relaxed around him when they realized Eloise trusted him with her kittens. A couple of pages are devoted to describing and illustrating Baxter’s heart-warming relationship with the kittens.

(Spoiler alert:) When the kittens are several weeks old, the boy lures him away to play in a field (leashless in the illustration, which is highly discouraged for many types of hound dogs since they wander according to their noses or hunting instincts) and Baxter remembers his pre-kitten days and trots off to enjoy himself. He returns to find the kitten box empty (cruel trick!) and he begins howling until Eloise explains that they’ve gone to new homes. He shows symptoms of depression (surely difficult to tell based on basset facial expression) and eventually winds up in the laundry room box where it still smells like kittens. The story ends with Eloise thanking and comforting Baxter and saying, “It’s good to know I might have more kittens- someday.”

Not only is the story heart-wrenching, but the number of pet-ownership no-no’s adds up high enough to make a responsible pet-owner howl with frustration, the worst being the unspayed outdoor cat. In addition to the attractive illustrations, the CD with optional page turning signals and empathetic focus on the dog’s perspective were somewhat redeeming. The story flows smoothly and despite the negligent actions of the owners, the focus remains purely on the animals through the absence of any people names or faces (only their feet are seen). I only growled about the negligence after re-reading it. Although not up to standards for AR folks, this book can be used as a learning opportunity about how to better take care of your pets.