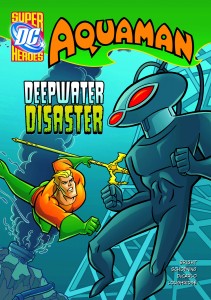 Earlier this year I reviewed Wonder Woman: Rumble in the Rainforest and this next book is in the same DC Super Heroes style, perfect for any fan of fast-paced, action-packed adventure with an environmental twist. Aquaman, also known as the Sea King, is delivering a few seafaring men to shore who were struck hard during a terrible storm. As he’s about to leave, a coast guard officer approaches Aquaman and relays, “We’re getting alarming reports from the Sea Floor Explorer oil rig off the coast of Louisiana…Workers on the rig radioed for assistance, but since then we’ve lost contact.” He’s off to go help and along the way sees panicked mako sharks, bluefin tuna, and squid swimming away from the rig.

Oil spill. And a big one. Aquaman recruits the aid of many animals – moray eels, sawfish, humpback whales and even cranky crustaceans – to rescue workers and plug up the hole that’s seeping the deadly oil. Also in the disaster response team is the normally devilish Black Manta, Aquaman’s arch nemesis, who agrees to put their quarrel aside in this desperate time of need. Are they successful? You’ll have to read this quick, well-written, 48-page-turner to find out.

Please note that this book is very timely now that it’s been one year since the Gulf Oil Spill. However, it is by no means an accurate portrayal of what took place and doesn’t portend to be. It’s still a colorful read and ends on a hard-hitting note as Aquaman addresses the sea creatures, “in this time of our greatest tragedy, some of you must stay and help. Some of you must escape to places where you can be safe. But ultimately, we must trust the land dwellers to clean up our home.”