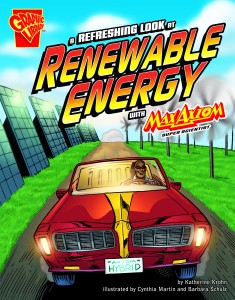 Meet Max Axiom, a superhero scientist who leads readers into the renewable energy unknown in this attention-grabbing, educational graphic novel. Max is an atypical persona. He’s African American and bald. His lab coat enables him to travel in the space-time continuum. Max is also super intelligent and possesses the ability to shrink down to the size of an atom to better explore his scientific inquiries.

In Refreshing Look, Max traces the energy source for household electricity and finds it to be a coal-fired power plant, which of course is a major environmental pollutant. This leads him to investigate renewable energy. On a snazzy gliding plane, one-person kayak and even a surfboard, we find our protagonist traveling to interview Bill, a solar-powered home owner, about his solar collector and electric panel; Carlos, an employee at the Grand Coulee Dam which generates hydroelectric power; and Jane, a proud driver of an ethanol-fueled vehicle.

Wave power off the coast of Portugal, wind turbines in Texas, solar farms in California’s Mojave Desert, and Iceland’s collection of geothermal energy are also covered, as are in the in-depth ways these processes function. And Max isn’t one to shy away from the nitty gritty issues. He’s clear that even with dams, fish may get hurt, but that scientists are trying to solve such quagmires. One such solution is a fish ladder.

Let’s just say, I liked this publication over Onion Juice, Poop, and Other Surprising Sources of Alternative Energy. Max can also be found exploring the world of genes, hurricanes, chemical reactions, and much more in the Graphic Library series.