Onion Juice, Poop, and Other Surprising Sources of Alternative Energy 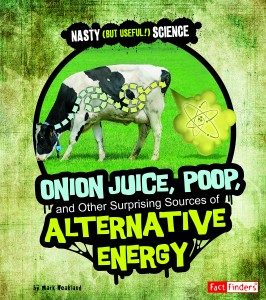 If Deformed Frogs sounded pretty bad, get ready for Onion Juice, Poop, and Other Surprising Sources of Alternative Energy. Repugnant as it may be, these energy sources reel kids into learning about our global reliance on soon-to-be-dried-up fossil fuels and the numerous alternatives that are either on the market or currently under development. Staunch vegetarians will likely be appalled by the first two “solutions”: fecal matter from factory-farmed cattle and pigs. Their excretions are collected in “digesters” or large holding tanks (similar to the manure lagoons we may be more familiar with), where the temperature is raised high enough so that bacteria can eat their fill and, in turn, produce methane gas.

The book clearly depicts factory sheds and pigs in barren pens. I suppose it’s a good thing they’re not perpetuating the red barn, grassy pasture myth. On the flipside, there is a large sidebar on how unstinky this whole process is, with the author stating that the smell disappears once converted to gas. But of course it’s going to be stinky! It’s concentrated poop! I don’t think any attempt at explaining away (read: the tanks are covered) or minimizing the impact of such an aroma will sit well with the communities that endure such odorous pollution on a daily basis. 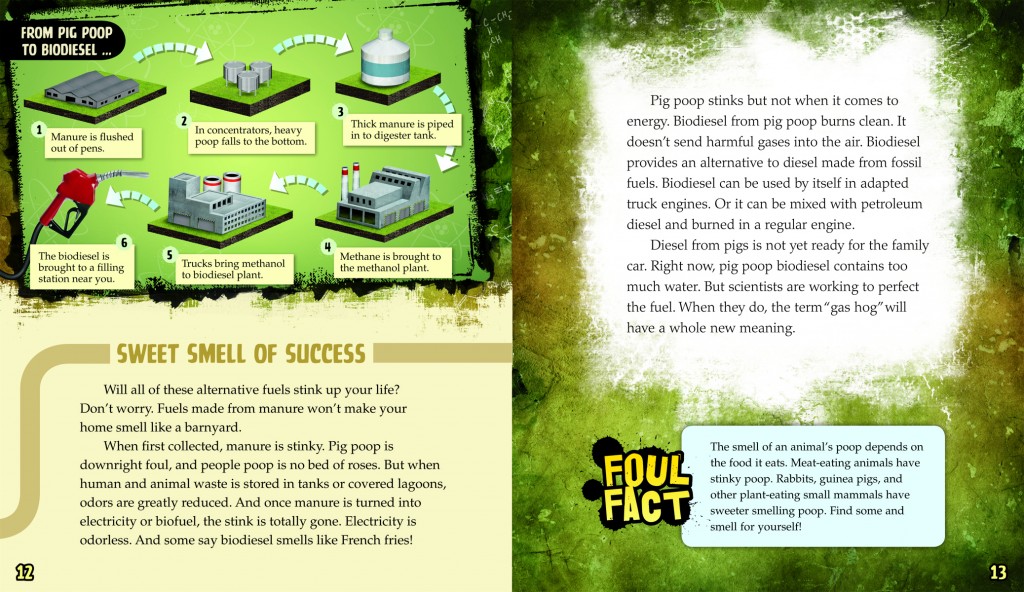 Diatribe over. I was much happier and at ease with seeing human poop digesters utilized by families in India or in Vancouver’s waste treatment facilities. Other neat profiled solutions included using food scraps from onion farms and other locales, with the same break-down by bacteria in the farm animal scenario.

Diatribe not over. I forgot to mention that the text speaks of scientists who are looking to make biodiesel through a mixture of animal fat (?!$#@), pine tree oil and methanol and others who are harvesting the innards of termites to assess their success in turning plant cellulose into energy.

Really, this was a mixed bag of information and gut reactions for me. But in my humble opinion, it is good to be in the know of what’s in the works and where we’re heading. I would have loved to see more emphasis made on the self-sustaining solutions for energy, like that of the Indian home digesters, or even solar power.