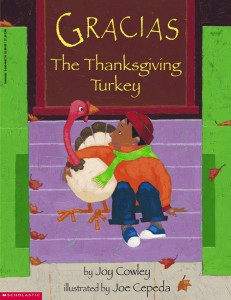 Where in the world do I start with this book? The Latina in me loves the fact that this holiday tale is about a Puerto Rican family living in a bustling, close-knit burrow in New York City, but the animal advocate  is frustrated at the blustering disconnects within the text.

Miguel’s truck-driving father sends him a special package from the road, telling him to “fatten this turkey for Thanksgiving. I’ll be home to share it with you. Love from Papá.” Naturally, Miguel quickly befriends the turkey who he names Gracias. And one can only image all the intricacies and flawed conditions of keeping a rather large bird in the city:

Throughout the book are the hard to digest statements from Miguel’s familia and neighbors regarding turkeys and this time of year:

What reconciles the tale for me personally is a scene in the church. Abuela forgot to put Gracias back in the house and the turkey follows the family to mass. Miguel apologizes to the priest, but Padre Jaime simply smiles and declares, “God made small boys and God made turkeys. Stand still while I give you both a blessing.” The family concedes that they cannot eat a blessed animal and in turn decide on chicken for dinner and a petting zoo home for Gracias. The last image of the book shows Miguel and his father feeding Gracias in his new residence.

With so many bipolar views on animals and tradition, Gracias, The Thanksgiving Turkey

is a great conversation starter on the sometimes painful amalgamation of differing cultures and their corresponding views on animals. What we really need is a sequel: “De Nada, the Thanksgiving Chicken.”