Dewey: There’s a Cat in the Library! 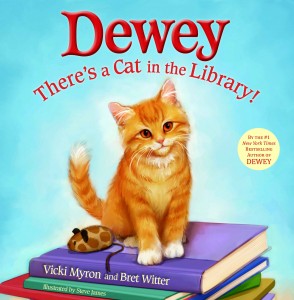 When a filthy, near-frozen kitten turns up in the Book Return slot of the Spencer, Iowa library, the staff bathes him and christens him Dewey (a later contest would fill out his name to Dewey Readmore Books). Dewey’s adventures as a library cat are chronicled in Dewey: There’s a Cat in the Library! Based on the true story of the town’s library cat, this book is a great find for young kitty fans – and since I live with one, I was excited to get a chance to review this title. Dewey’s story is so popular that a book about his life written for adults became a New York Times best-seller, and a book for older children is also available.

While the overarching story is both heartwarming and humorous, the book takes some looping twists and turns as it imagines Dewey’s soul searching about his work as a library cat. The storyline becomes somewhat meandering and contrived, which detracted from my overall experience of the book, however, my child adores this book and picks it out to read regularly. That there is even any rambling is surprising since the story is such a compelling one, even without Dewey’s imagined crisis of faith, but the fabulous illustrations by Steve James go a long way toward keeping this book on track.  In particular, Mr. James’s illustrations of some of Dewey’s sillier antics (and there are plenty) never fail to elicit giggles from my child.

Dewey died four years ago, but his spirit lives on in part through the books about his life. What is not mentioned in this version of his life’s tale is the remarkable support that his presence seemed to give to an aching town, and in particular a librarian who needed some TLC. Of the many media stories about Dewey, this one provides a good overview.

This story of how an act of cruelty ended up changing many lives for the better ends up being a fun read for kids who like silly animal books and the funny antics of cats in particular. Alert or sensitive young minds may question the whys and hows of Dewey’s being dumped, which is glossed over in the book. Dewey’s story has become popular around the world and it would be fabulous to see it tied in to some gentle reminders to spay/neuter or a pets for life campaign.

I recommend this book for ages 3 through 7.