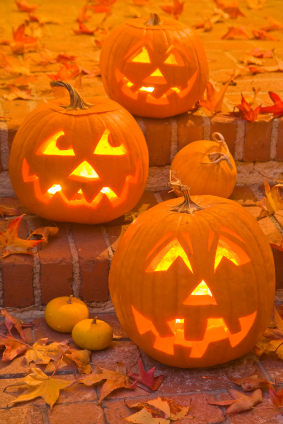 Old Man Wilkerson is a grumpy, rude, sloppy-looking old man with a discerning obsession for perfect pumpkin pie. His surly attitude and determination to eat pumpkin pie makes for a perfectly creepy, very unlikeable, bully-of-a-ghost when he keels over on Halloween night before he can even take a bite of the pie his wife had made. No one can blame Mrs. Wilkerson for burying him in the pumpkin patch and moving away, never to be heard from again.

Thank goodness Jack and his spunky grandmother move into the house and handle the grumpy ghost with such aplomb. They spot Wilkerson’s ghost on Halloween night when their own pumpkin pie sits cooling on the windowsill. The ghost materializes and announces his expectations of a perfect pumpkin pie or else he will haunt them and never go away. Although Jack seems as concerned as anyone would be confronted with a grumpy ghost, “Grandma put her hands on her hips,” and says, “Oh stop that moaning… Sit down and have some pie.”

But of course, that’s not enough for the self-proclaimed “pie gourmet” who rejects the “insultin'” pie and says if he was alive, he’d have a “pie degree… a Professor of Pie with a PhP.” Oh no, it has to be a perfect pie or else he’ll keep haunting Jack and his grandmother! When he poofs and leaves the kitchen a mess, Jack asks his grandma if she’s afraid and she says, “Why?… He’s nothing but cold smoke. He’s a ghostly fussbudget with an appetite for a good pie” and they set out to show him a good pie.

Grandma nonchalantly models how to deal with bullies and takes advantage of the challenge to improve on her pies, using the criticism and turning it into advice from the persnickety phantom pie-eater. Wilkerson doesn’t get any nicer and, in fact, looks and acts quite disgusting and demanding but Grandma shows Jack (and us) how to handle him without backing down. In a time where bullying is becoming more prevalent in schools, politics, and other arenas, this story gives an underlying lesson on how to stand up and even take advantage of the bullies instead of feeding into the fear factor which give bullies power.

Initially my daughter wasn’t sure if she liked the story but she caught the magic of listening to a ghost story and it has been re-read a couple times already. There’s an ongoing fascination to things that scare us which is evident in the popularity of horror movies. But for many children (as well as me, since I don’t enjoy scary movies), the attraction to this book may come more from the fun, intriguingly sloppy illustrations to reflect the intriguingly sloppy Wilkerson (that is somehow pleasing to the eye), and a repetitive rhyming rant that is as much fun to read in a grumbling voice as to listen to. For vegans, there is only mention of whip cream and of course lots of talk of pies (but we know there are vegan versions of those). Parents may want to note that there are deep topics embedded in this fun ghost story and it may not be appropriate for the faint of heart. Of course, feel free to nibble the top surface or dig in as deep as you dare.

The author Denys Cazet doesn’t pull any punches when he also addresses death in the second page of the book. Being so used to skirting around talk of aging and death in our society, it was a shocker to have Old Man Wilkerson state “Then I AIN’T GOIN’!” if there’s no more pie after we die. And of course, then he dies, dramatically keeling over into his beloved pie, still grasping his fork. Even if we don’t like Wilkerson, we can all relate to not wanting to die because there are pies we want to enjoy. We are so used to avoiding the topic of death, though, and we often fear it, so we rarely address it with our kids until they have experienced a loss. I was hesitant to read this to my child even though we had discussed death when we lost our beloved family dog this year. But I decided avoiding it was like hiding it in a dark closet, making it an unknown and even more scary than if it was brought out in the open to learn about it, address it, and lose our fear of it. And honestly, the topic of death didn’t even come up with all the various entertaining elements of the story. But Grandma’s pretty smart because fear is “nothing but cold smoke.” And Cazet is pretty clever to incorporate such weighty topics so casually in a children’s story and lightening it by having ornery Wilkerson come back to enjoy some more pie as a ghost every Halloween.

Top some of our biggest fears with a dollop of humor, some excellent illustrations liberally sprinkled with a gross factor that fascinates, and a crotchety, repetitive, rhyming ghost and you have a perfect pie story for Halloween!

Ages 4-8 according to Amazon, but I recommend up through adulthood.